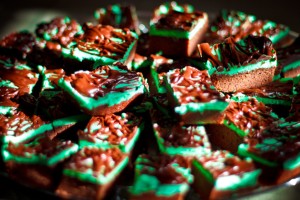 This is a family classic that my mom has been making for years.  I’m not sure where she got it.  It’s pretty simple (especially if you take my advice and don’t bother cooking the brownies from scratch).  It’s delicious (it has lots of butter and sugar and also has a bit of booze).

The first thing I must note about this recipe, is that you should make the brownies however you like to make brownies the best.  I’ll simply say that you don’t want brownies too sweet and you don’t want them too fudgey.  The icing and chocolate on top are quite sweet.

I’m not even going to bother pretending I’ve ever tasted better homemade from-scratch brownies than what came out of of box.  It’s simply not true.  Brownies are one of the most delicious things that come in powdered-form from a box, and I am YET (in my 30+ years on this planet) to find a better brownie from-scratch.  If you have a recipe, I want to hear about it!

So I’ll list a way to make them from scratch:

Chuck the eggs in a bowl (after you crack them and open them, weirdo) and beat them.  Fire everything else into the bowl and mix it up.  Mix well, but not too well.  Always mix brownies by hand.  If you beat the life out of them before you cook them, you’ll get bricks.   Bake at 350 degrees for ~30 minutes.  Remember, no sane person on Earth enjoys well-done brownies, but you also don’t want to under-cook them for this recipe.  Let them cool when they’re done (important!).  You don’t want the brownies too warm when you put the frosting on, or it’ll melt and make a catastrophe.  And probably ruin everything.  Best to avoid.

For the frosting, bust out a food processor or mixer if you have one. 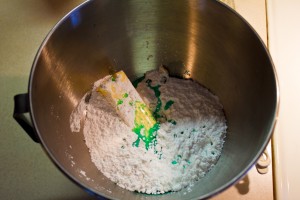 Put the ingredients in a bowl and mix them.  A lot.  If it looks too thick, add a bit more booze.  I’ll be honest, I also usually put in a few drips of green food color (it looks more dramatic when finished). 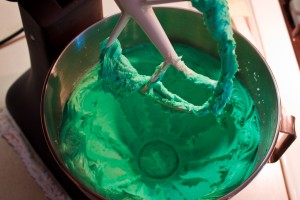 Now, using a knife or one of those fancy strange things for icing, spread it evenly across the top of the brownies. 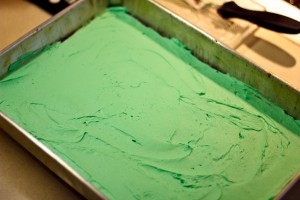 Cool it down in the fridge now for the same reason as above except in reverse.  This time you’re going to be dropping melted hot chocolate on top of the icing, and you don’t want the icing to melt again. 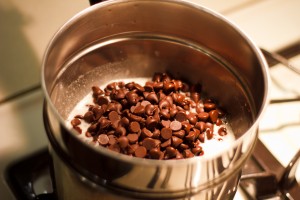 For the glaze, I personally use a double boiler.  I don’t see any reason why you couldn’t do this very easily in the microwave. 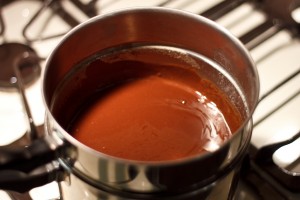 Melt the stuff together.  Stir often. 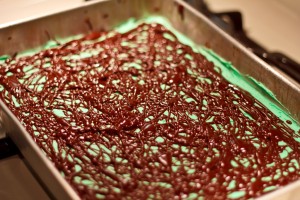 That’s how you drizzle

When it gets a smoothe and dreamy consistency, drizzle it over the brownies with a small spoon.  It takes a while, but the presentation is worth it in the end.

Cut down into desired size, stack onto a fancy plate in pyramid form, and curse at yourself for not having any fresh mint leaves while you take your glory pictures.

Now, you’ll probably have some chocolate left over depending on how much you used for the top.  Break up a bunch of pretzels and throw it in the chocolate.  Throw it in the fridge.  It’ll be awesome in an hour.