One of the most evil and delicious things human beings have invented.  Of all of my silly little specialties that I make, this one has had the most time, effort, and revisions put into it.  This recipe is quite a process to undertake.  It takes a few hours to make and it probably takes more than a few hours off of your life.  They’re so damn good though.

Filling:  (these don’t have to be terribly accurate)

Warm up the milk to approximately 105F.  Dissolve the yeast in the warm milk in a large bowl.   Add the eggs and beat them up a bit.  Then add all the rest of the materials and mix.  Using a mixer with a dough-hook works quite well.

Make the dough into a ball and place in a large bowl.  Cover the bowl with a cloth and put it in a warm place to rise for at least an hour (I usually heat up the oven before hand to it’s lowest setting and turn it off while making the dough).  It may take a bit longer depending on the yeast and all kinds of other miraculous factors of the cosmos, but you want it to be about twice the size it was when you put it away.

Roll it out on a large, flat, floured surface.  Try not to beat it up too bad while you’re doing this.  You want to make a rectangle that is rough 4×3.  With this amount of dough, it’ll work out to being about 20×15 or a bit bigger.  Even though it’s basically impossible, you want to make your edges as close to straight as you can. 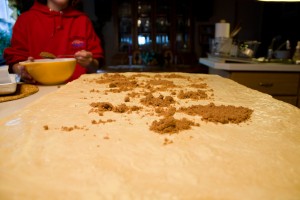 Pre-heat the oven to ~300.  Mix up the brown sugar and cinnamon in a bowl.  Spread the softened margarine all over the dough rectangle.  Then sprinkle the sugar mixture onto that.  Make sure to get it as even and uniform as you can.

Now, starting from the long end (and you’ll want two people to do this), roll the dough.  You want to continue to pick the roll up gently, tug gently, and continue rolling.  You do this to make sure the roll is pretty tight.  If you don’t roll them tight at this point, they’ll cook apart and get sloppy by the end. 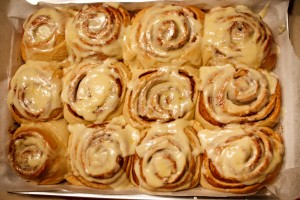 Now this part can be a little tricky since it depends on what kind of pan you have for this.  You want to line a cake pan with parchment paper (technically this is optional, but it makes getting them out a hell of a lot cleaner).  Put them into the pan so they will cook INTO each other a bit.  This is how you keep the outside edges from drying out while cooking.  Cook for 35 to 40 minutes.  You want the tops to be getting a nice gold color.  You don’t want to overcook these or it ruins the “Cinnabon effect”, but you also don’t want them raw on the inside.  Use your best judgement.

For the last 10 minutes that they’re cooking, toss all of the icing ingredients into a mixer and beat them to death.  You want it airy.  You want it fluffy. 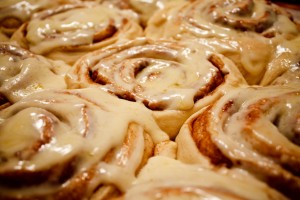 Take them out of the oven.  While still very warm (not scalding hot) slather them down.  If you want some extra credit, use a spoon to make sure it gets in the cracks.

Done and done.  They’re worth it.  They also microwave up like champs (~15 seconds).