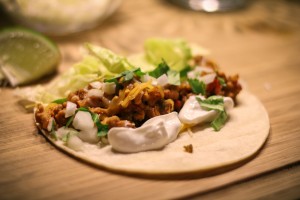 I devised and revised this recipe in order to come up with a taco that sits somewhere in between the Americanized ground beef, cheese, and lettuce version, and the Mexican street-taco of meat, raw onion, and cilantro.  I think this is a success!  Read on! 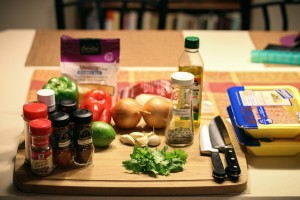 Chop the onions and peppers so that they’re fairly small and uniform.  We’re cooking these quite a bit, so you want them to be equal in size for an even saute. 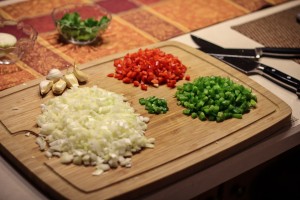 Using a fairly large pan, add enough olive oil for sauteing the vegetables and heat it up. Add the onions and peppers.  Lightly season with salt and pepper. 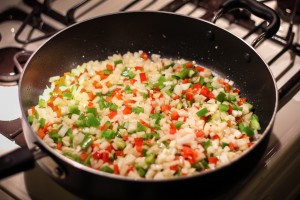 Saute in a Large Pan

Cook them over medium heat until they’re soft and some of them JUST start to brown.  Stir often.  This will probably take about 10 minutes. 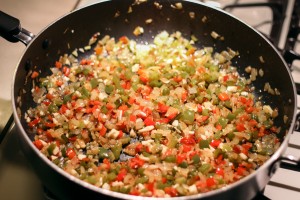 Cook Until They Just Start to Brown

Here is where we add everything else.  So, add the garlic, smoked paprika, cayenne pepper, ancho chili powder, cumin, Mexican oregano (or regular oregano, if you don’t have Mexican), and season with salt and pepper.

Gently add the chicken and turn the heat up.  Break the chicken up and carefully fold it onto the bottom of the pan. Ground chicken is kind of strange.  It can kind of smear and get awkward.  Don’t do that.  Chop carefully.  Get the chicken mostly cooked and broken apart.

Add the 1/4 to 1/2 cup of tomato paste.  Turn it down to a simmer, cover, and stir occasionally for about 15 minutes.

While that is simmering, prepare the other ingredients for the tacos.  Chop the onion and cilantro.  Cut the limes into small wedges (probably ~8 per lime).

Now is the time to taste it.  You’ll probably want to add more salt.  Happens every time. 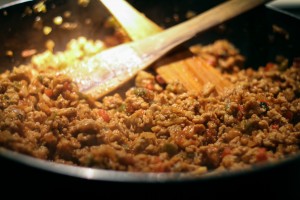 Party time.  Here is where I explain that it’s a taco.  Do it however you want!  My suggestion is to do it like I did it in the next photo.

Place a small pan on the stove (or a griddle if you’re serving many people) and get it hot.  Toss the corn tortillas on the pan for about a minute to warm them up and get them pliable.  Add the chicken, sprinkle the cheese on top to melt, and add the rest in the proportions that make you happy.  I like to use lettuce, raw onion, fresh cilantro, a squeeze of a lime wedge, and sour cream.  Other suggestions include guacamole (got ya covered right here), cucumber, radishes, queso fresco, cabbage, or a salsa of your choice (preferably not the ketchupy stuff that passes as most jarred salsa).

BAM!  That looks delicious.  Take pictures of it to remind your Facebook friends that your dinner is much better than theirs.  Now for the tough part:  Folding. 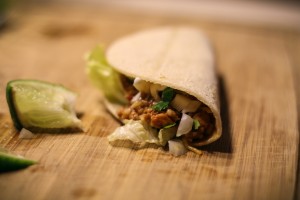