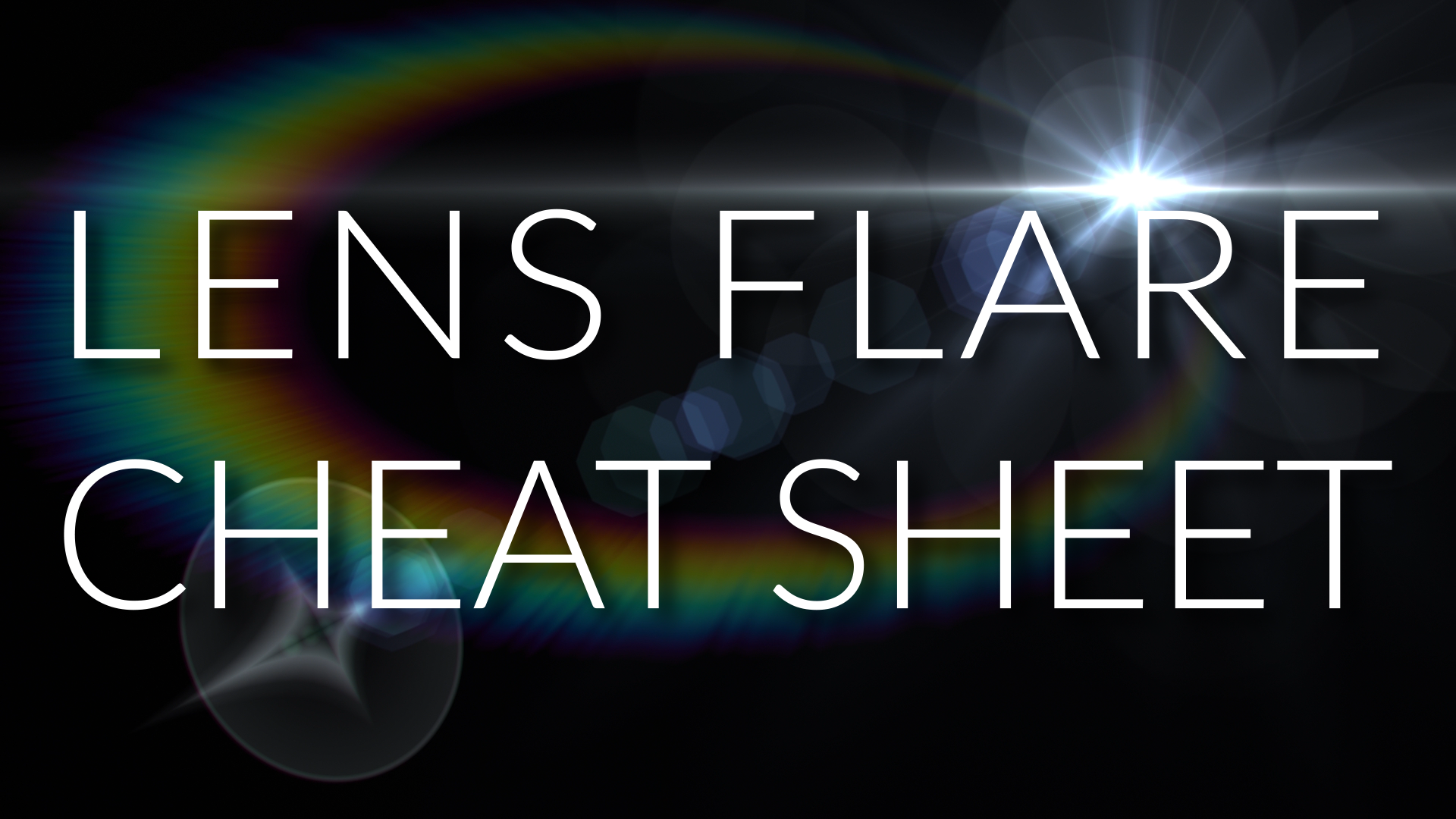 I’ve added many lens flares to many, many projects over the years. Sometimes it’s a realistic effect that you need to break through from the background to the foreground. Sometimes it’s a dramatic way to accent a logo or introduce text. I made a “cheat sheet” for basic elements so you can describe lens flares with clients more easily. Read on for details!

I’ve had to coordinate with all sorts of clients about this subject. Over time I realized that they’re somewhat hard to explain without a relatively specific nomenclature.

So I used Video Copilot’s Optical Flares plugin for Adobe After Effects to make a simple flare with a bunch of exaggerated components. Then I added the overlay to illustrate the various basic names. I also rendered a video so they could see how each component moves. That way if they had suggestions or changes, we were on the same page!

Of course, this is by no means a comprehensive guide to every scientific nuance of how lights “flare” inside lenses. This is just so my clients and I can be on the same page by simply sending them this link! You can also download the image as well.

“Flare” is the term most people throw around to mean the entire thing, but I generally try to keep it at least about the shape of the primary element and/or light source.

“Glow” is how large or bright the flare looks overall. There is generally no specific detail to the glow. It’s typically circular (or oval depending on lens) and usually falls-off pretty quickly as you get further away from the center.

“Streak” is a large, usually horizontal element that extends beyond the flare/glow. Depending on the lens (and especially with smartphones how many fingerprints are on your camera), you may get diagonal or even curving streaks. If you’re adding flares to shot footage, it’s important to note what any light-sources might do in the original shots in order to copy them as accurately as possible.

“Spike, Glint, or Shimmer” are all a bit subjective as to what you apply them to. I would say any shape coming from the flare that isn’t the streak. Shimmer is usually used when the individual spikes are evolving and animating in some way in a video.

“Reflections or Multi-iris” are a string of (usually) same-shaped objects that travel counter to the flare (and are always the shape of the aperture – so pay attention to f/t-stops and number of blades).

“Fan, Hoop, or Loop” is another element like the reflections – it moves counter to the location of the flare. These come in all shapes, sizes, and colors. Often colored across the light spectrum. Sometimes they’re a full loop, but in my experience this is extremely rare in real lenses. You’re more likely to see them be an almost vertical element on the sides of your frame (especially in wider aspect ratios).

“Caustic” covers a variety of shapes and complex colors. They also move counter to the flare. This is pretty much a catch-all for anything not easily listed in the elements above.

There’s one element that is only turned on in the video, and that’s “lens dust/dirt”. If you watch the animation, you can see the elements fade in and out as the flare passes behind them. This generally should be the same shape as the reflections/multi-iris (but it’s not in the video to avoid confusion) as it represents particles physically on the lens and incredibly out of focus.

If you have any questions, comments, or suggestions about this image or video, don’t be afraid to contact me!